Born in 2005 in the mountains, the Hadra Trance Festival is a unique event in terms of its organization, the values it defends, but above all by its eclectic and multidisciplinary program that mixes musicians, video artists, visual artists and performers.

Over the years, the festival has become the biggest celebration of psychedelic trance culture in France and is now recognised as a reference in Europe and throughout the world. Over the years, the festival has conquered the hearts of an ever-growing number of festival-goers.
On the banks of a lake, at the Plan d’Eau de Vieure, in the Allier; 4 days of celebration, 3 stages and more than 50 artists with an exceptional musical diversity during 72 hours non-stop attract 8000 people from all over the world every year. 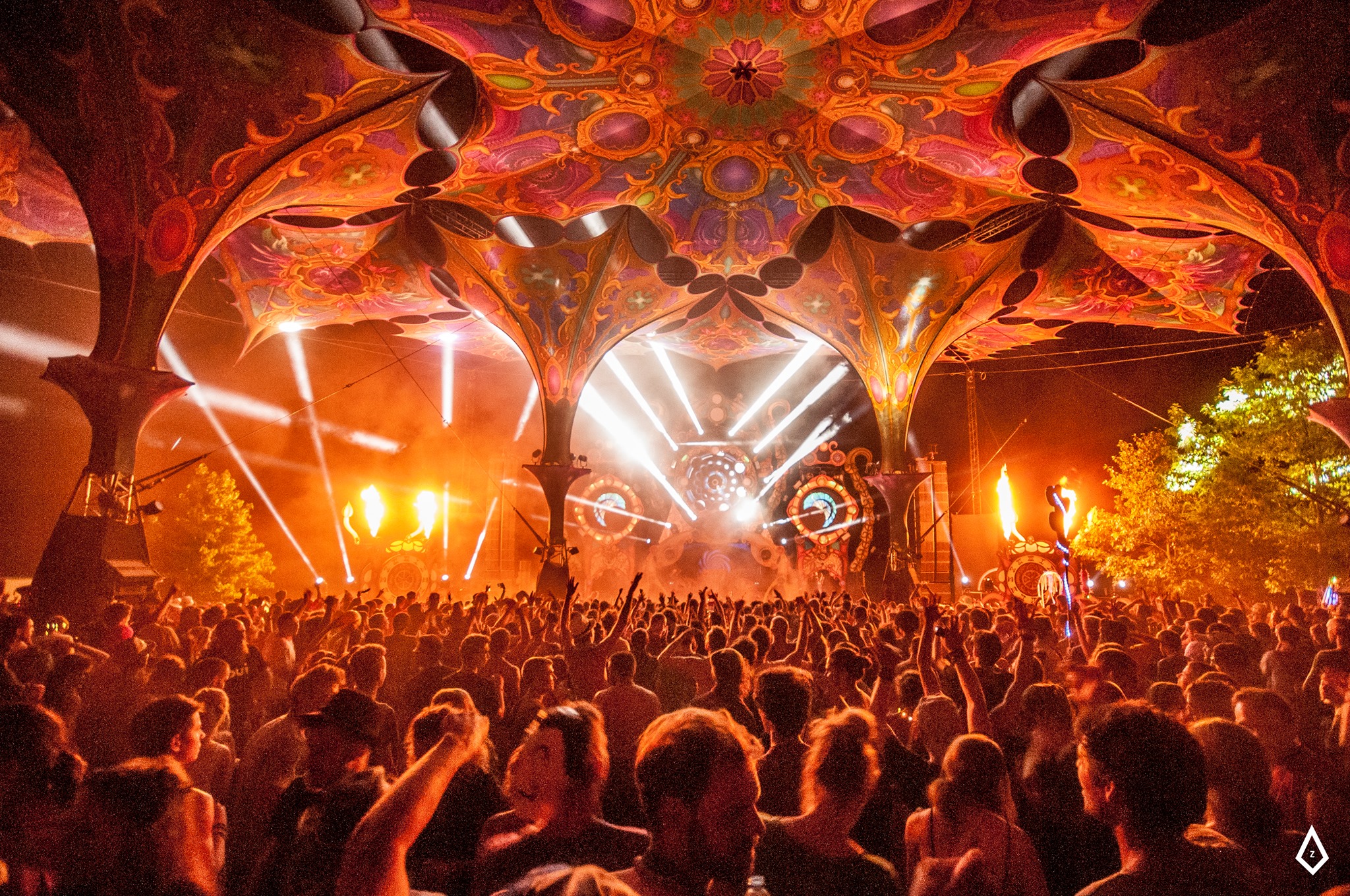 The Hadra Trance Festival is one of the only French festivals to have chosen to focus its programming on the different styles of psychedelic trance and the alternative aesthetics that have developed in parallel.

The mainstage, the true heart of the site, inspires admiration by its structure, its decoration and its programming essentially focused on the sub-genres composing the spectrum of psytrance music: progressive, dark-prog, psygressive, full-on, psychedelic, dark-psytrance and forest!
The alternative stage offers a wide range of electronic music developed in parallel with the different styles of psychedelic trance: techno, drum’n bass, hi-tech, dub, world music with the presence of traditional bands and formations that combine instrumental and electronic sounds.
Finally, a third stage acting as a “sound cocoon”: the Chill-Out, where the music is deliberately calmer and softer than on the other stages in order to create a floating and restful atmosphere. Downtempo, ambient, psybass, electronica, psychill, glitch are as many styles that you can appreciate during this sound relaxation. 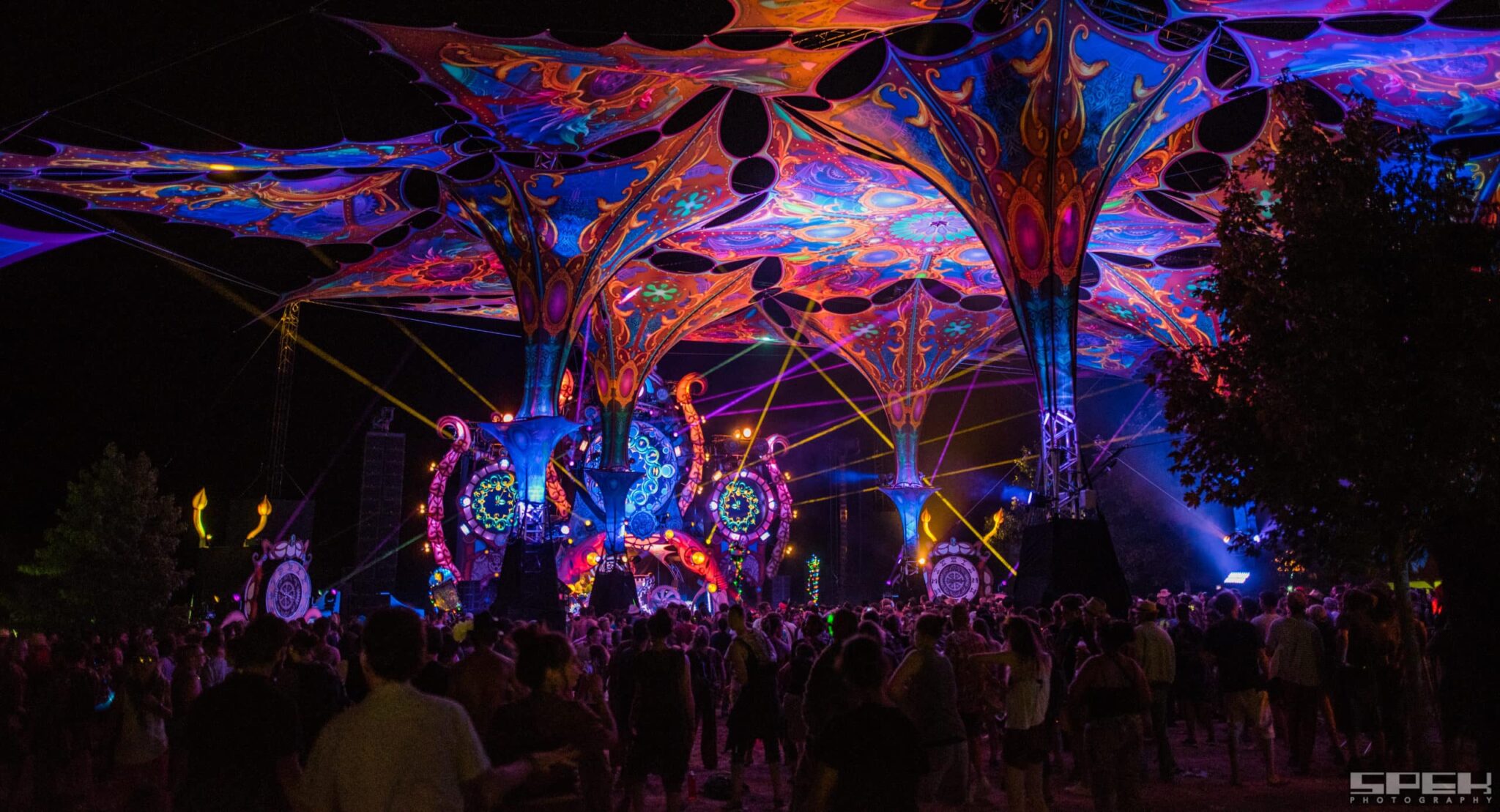 Stage design is a fundamental component of trance culture. The characteristics of these transformations allow festival-goers to be immersed in an immersed and fantastic universe.

Each year, the Hadra Trance Festival invites teams of decorators from the four corners of the world. Decorators, visual artists, video artists, painters… The teams in charge of the decoration are as much expected guests by the public as the musicians, they strongly contribute to the festival’s so singular magic.
Each team has its own speciality: psychedelic canopy, custom scenography, high definition vjing, interactive installations and digital arts, wooden structures etc… In total, more than fifteen teams, professionals and volunteers, are mobilized to transform the twenty-five hectares of the Vieure lake into a utopian world. 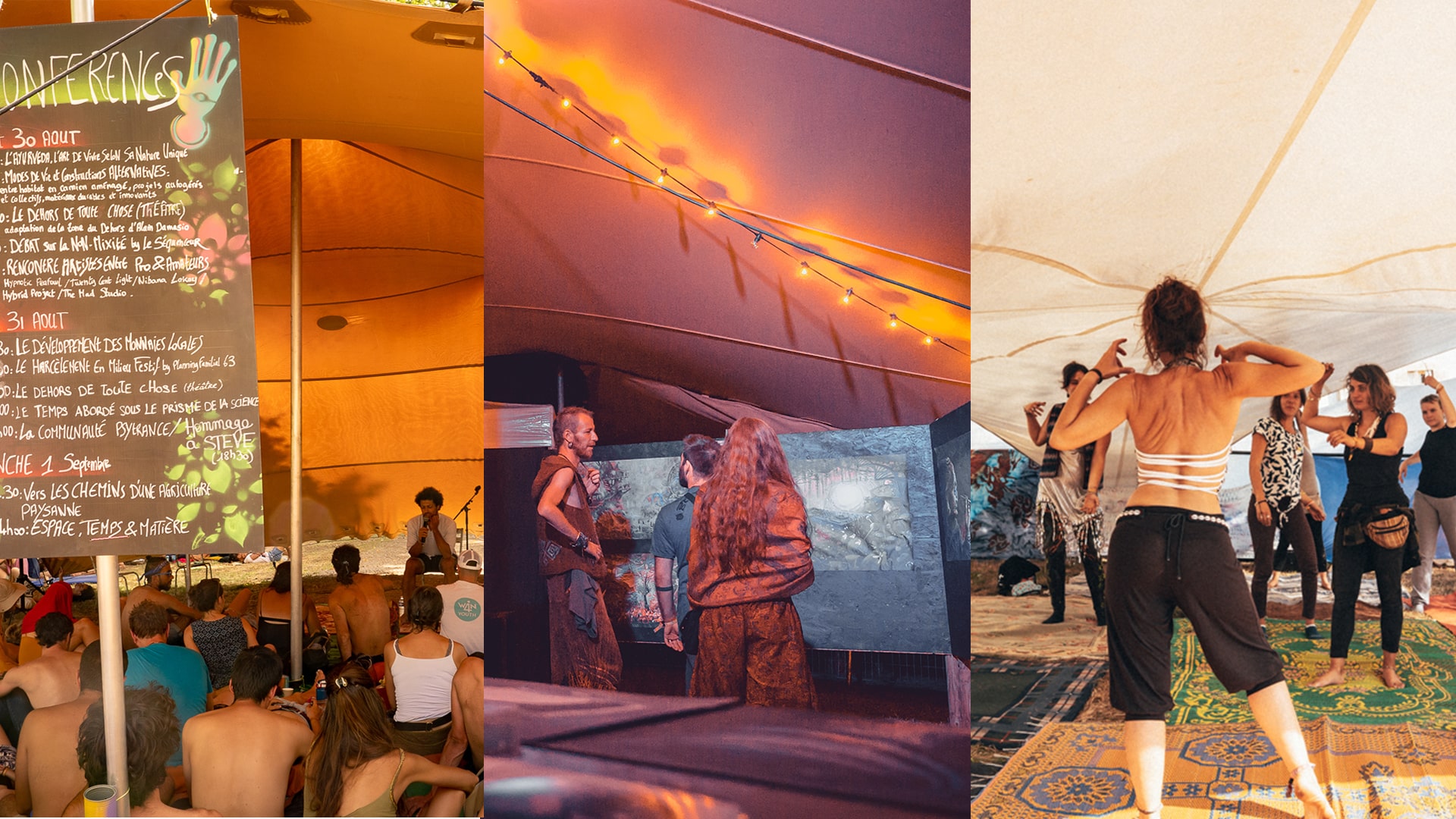 Throughout the event, the public has access to an alternative space for lectures, art exhibitions, workshops, yoga classes and musical awakening. All free and open to all. In a few words, a place for exchanges, encounters and discoveries.

Since 2017, the festival offers a conference area where professionals, amateurs and the curious come to debate around themes inherent to psychedelic culture and the values associated with it. This space, conducive to exchanges and encounters, allows the public to become aware of current and social issues: festival-goers are invited to take part in the debates and to become actors of the festival themselves.
A second space is dedicated to workshops: free and open to all, it offers many activities of initiation and awareness around the central themes of the Hadra Trance Festival. These workshops have become a determining element of the festival: they invite the participants to exchange, invent and collaborate in order to apprehend the festival from another angle.

In addition, the festival offers numerous shows that animate the different spaces of the festival. Stilt-walkers, circus artists, jugglers and fire-eaters will be at the heart of the crowd to present their shows.

Throughout the festival, you will come across many artists and collectives who stage performances that are as comical as they are moving: an invitation to discover little-known art forms that will transport you into a psychedelic microcosm. Fire jugglers, travelling circus companies, body painters, dancers and clowns are all characters who will cross the site and plunge you into their unique universe, poetic or funny.
These artistic components have always been developed by the festival-goers themselves. Today, they are the subject of a program that allows the integration of professional artists and companies into a unique event and the welcome of a new public, interested in these numerous proposals.

The Hadra association was founded in Grenoble in 2001 by a group of fans of electronic music and in particular psychedelic trance. Etymologically, the “hadra” designates, in Arabic, the collective trance as it is practiced during the ceremonies of Moroccan religious brotherhoods, in particular the Issawas.

The association began from its creation to organize “psytrance parties” that gathered 300 to 400 people in the Grenoble region, in an adapted and legal framework, to allow access for all to a culture still too little known and also the meeting and exchange between the public and the local and international artists invited for the occasion.
In 2005, the Hadra Trance Festival was born: a unique event in terms of its organization, the values it defends, but above all by its eclectic and multidisciplinary program that mixes musicians, video artists, visual artists and performers.
Over the years, the festival has become the biggest celebration of Trance culture in France and is now recognized as a reference in Europe and around the world. Over the years, the festival has conquered the hearts of the ever-growing number of festival-goers. 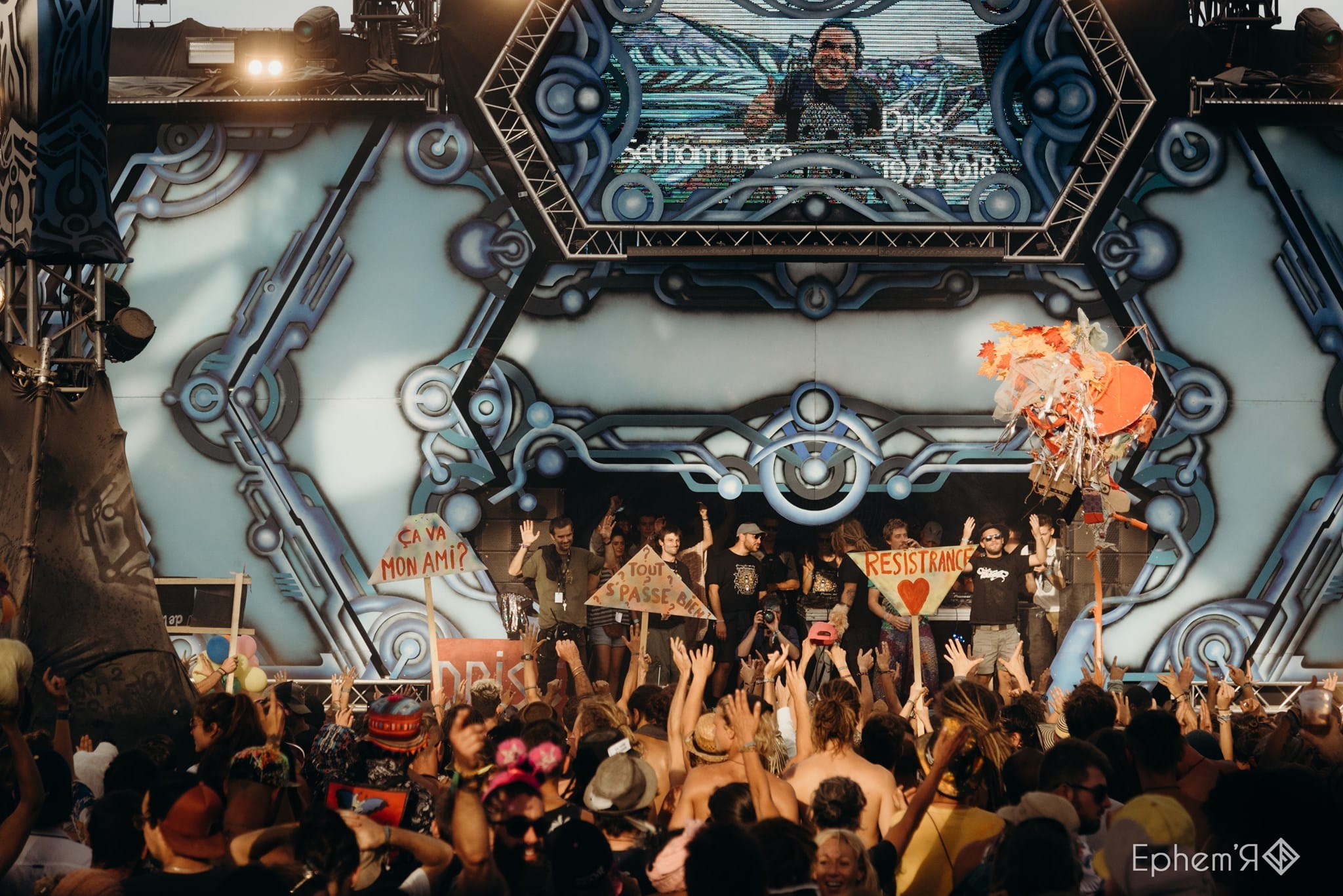